… and Copperfield asks for our feedback!

Ask any magician which three venues they would want to perform at and I can almost guarantee their answers would be the Magic Circle in London, the Magic Castle in Hollywood, and Las Vegas.

Fifth Dimension have been blessed to perform in all three! 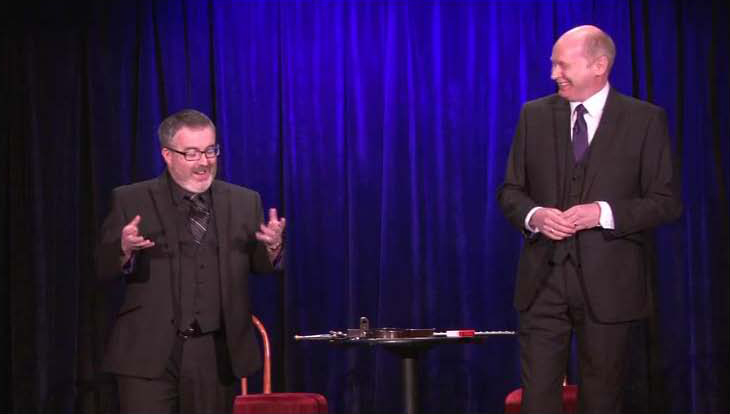 The journey started back in 2012. We were invited to perform at the Magic Castle by film director and star of The Real Hustle, R Paul Wilson, who is also a fantastic close-up magician. Anyone who is anyone has performed at the Magic Castle including David Copperfield, Penn and Teller, and David Blaine.

When arriving in LA, we were last to collect our baggage and, while waiting, met One Direction who were on their way to break America. They were nice guys to chat with and we soon realised everyone else had gone through customs. We ended up walking out through arrivals to thousands of screaming fans who took us to be part of their entourage and – of course – we played it up, saying that the One Direction boys were just behind us. This was 5D (our acronym for Fifth Dimension) as the opening act for 1D!

We were booked in the Magic Castle’s Palace of Mystery Theatre, doing three shows a night for members, celebrities and VIPs. During the week we met an unending carousel of fascinating people… all of whom seemed to be entranced by our Scottish accents. “How come we can understand you, but we can’t understand other Scottish magicians?” was a common question.

It was an incredible week of enjoying brilliant hospitality from many people and we also met and became firm friends with Scott & Lisa Land. Scott was the lead puppeteer on the film, Team America: World Police, and his performances were truly magical.

Return of the Magi 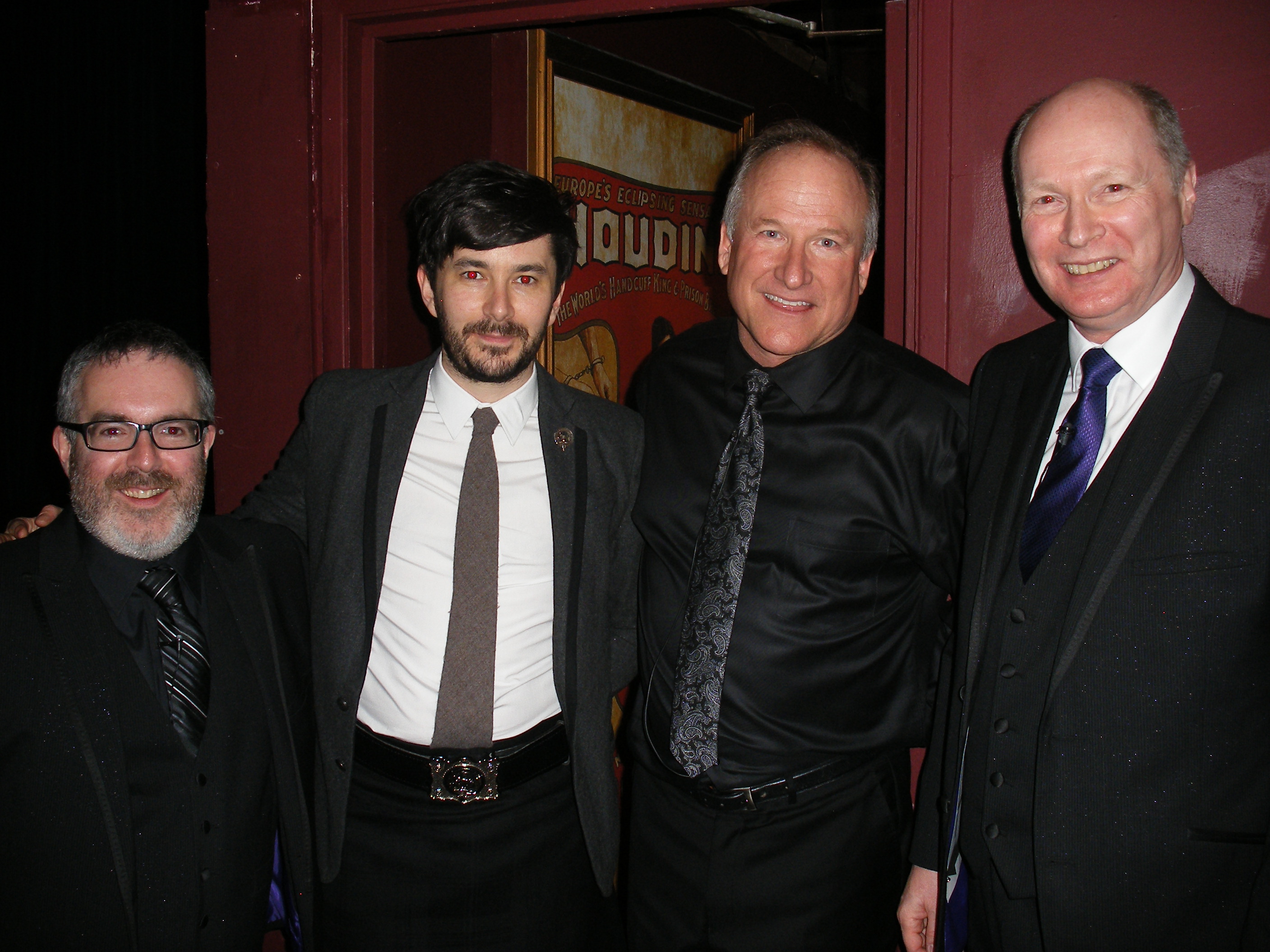 In 2014 we were invited back to the Magic Castle and had the privilege of meeting and performing for actor Neil Patrick Harris, who was the venue’s president at the time. We also took the chance to catch up again with Stuart McLeod from fellow north-east double act, Barry & Stuart. After a week packed full of shows where we showcased a brand-new routine, we decided to book a few days’ R&R at the end of the trip to see Vegas. It had changed quite a bit since our last visit in 2004.

This time, however, we were going to fulfil the ambition of a lifetime and were invited to perform at Jeff McBride’s Wonderground Cabaret. For one night only, Ivor and I were Vegas superstars and it was an amazing experience. Having heard of our Magic Castle success, we even topped the bill and were floating on clouds for the 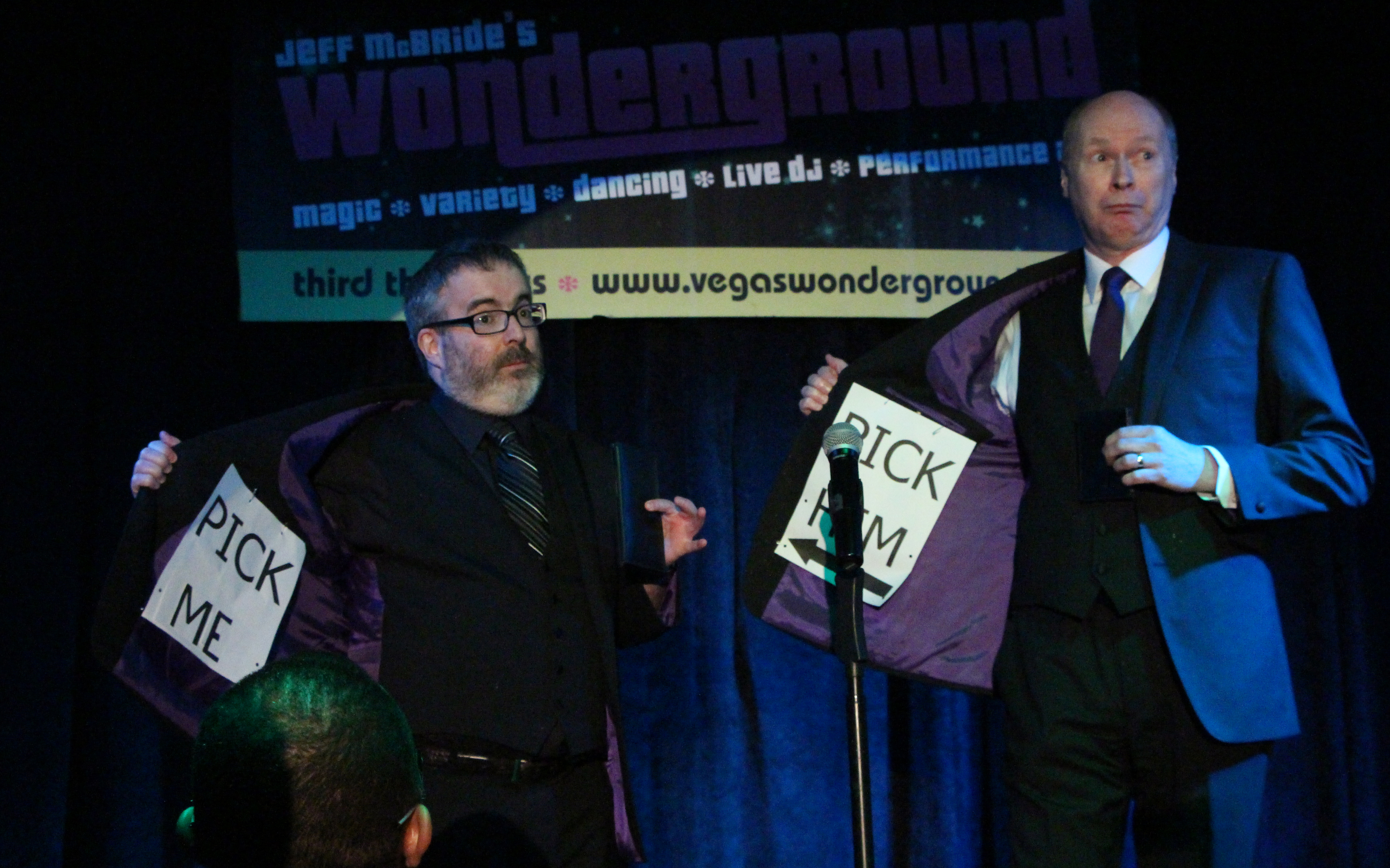 During our visit, we had also booked tickets to see David Copperfield. One of our magical friends was a friend of his manager and put in a good word for us… Cut a long story short, and we were upgraded to Copperfield’s personal table and invited to meet him backstage after the show.

I have watched Copperfield for decades and have been in awe of his performances and creative magnificence. Most times I watch magic shows I have an idea of how many of the tricks work but I can honestly say as I watched him perform right in front of me, I was blown away.

Our table was at the front of the stage, right in the middle, and his opening illusion was the appearance of a huge car. When it was revealed – and remember we were 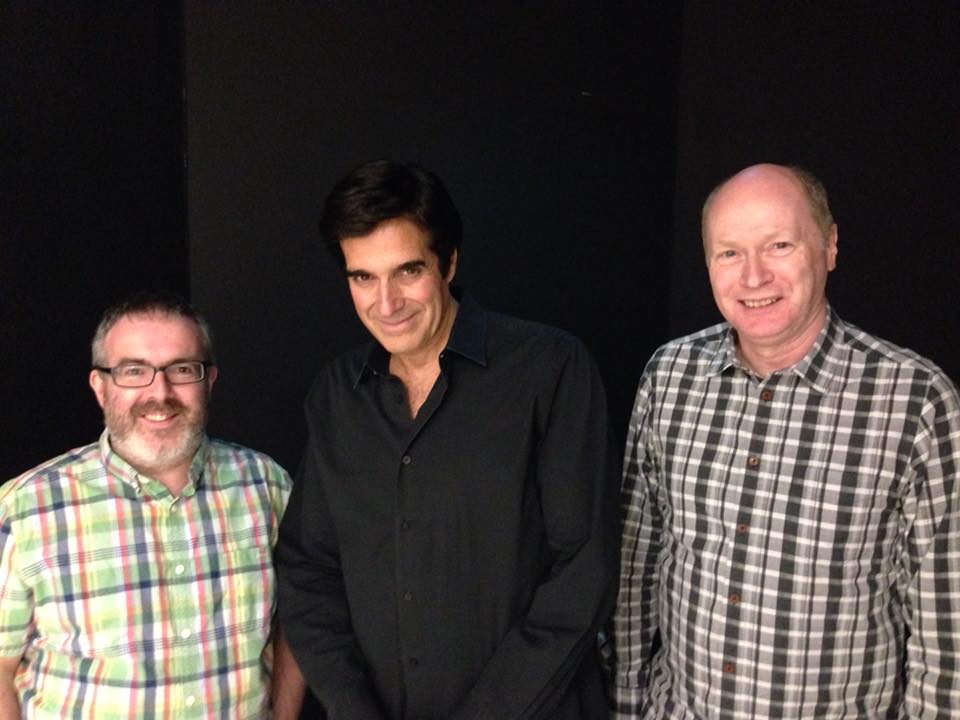 VERY close – I was so surprised that I jumped back with amazement. At that same moment, Copperfield took his applause cue less than two feet away from us, saw me jump back in surprise, smiled at us, and welcomed everyone to his show. The next 90 minutes saw a range of stunning illusions, and showed why he has been the highest-earning performer for many years.

Once everyone had left the theatre, we were escorted backstage to chat with his manager again until David arrived. He was warm and friendly and even asked for our feedback on a new UFO alien illusion he had started to present. Needless to say, we were very supportive – because it was a brilliant illusion. 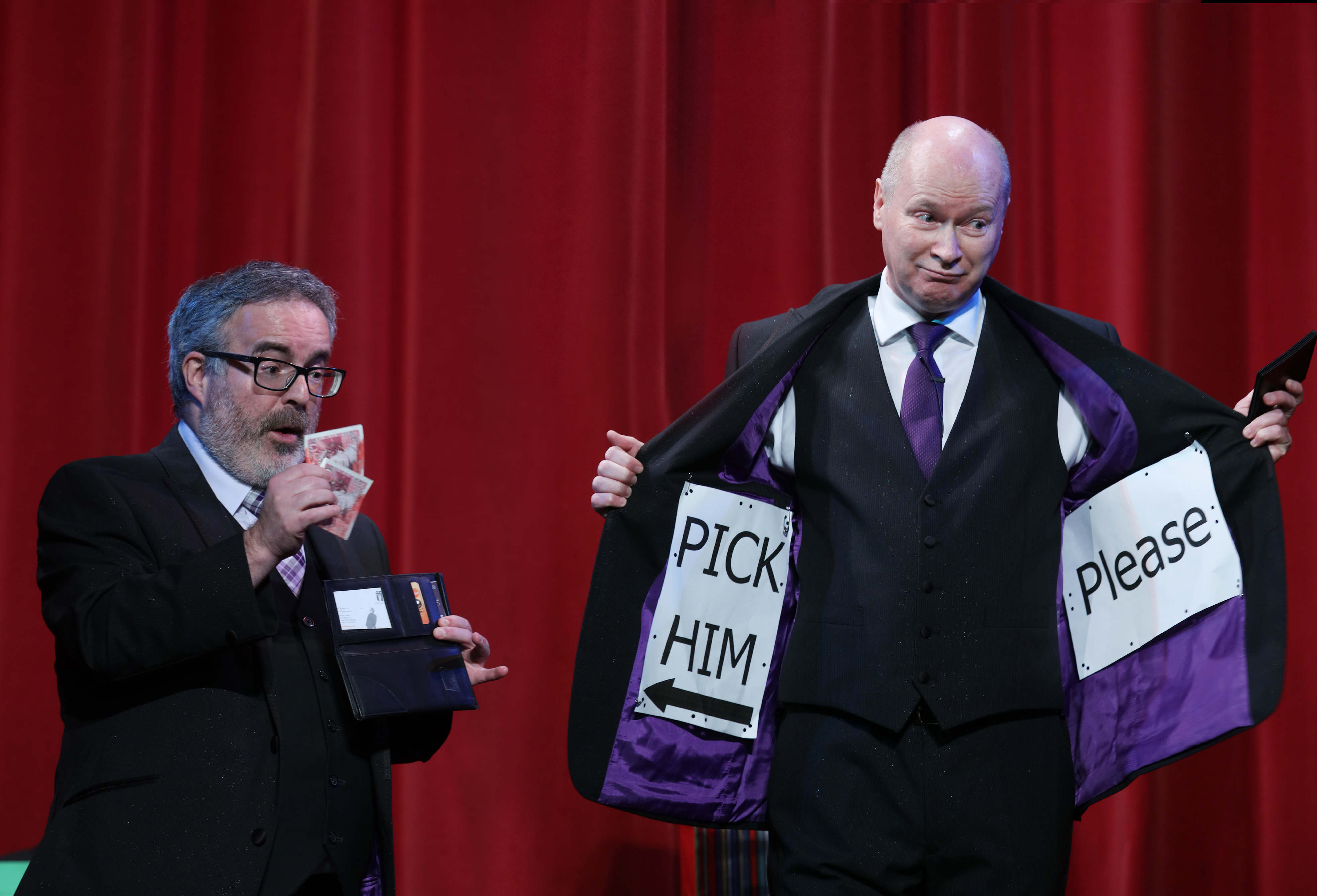 So, we had performed at two of the three must-do magical venues and the next was to happen on 3rd December 2018… but the story starts a little before then.

In February 2018 we were at the Blackpool Magic Convention, the largest magic gathering in the world. Every year around 4000 magicians from all over the globe gather together for a long weekend of lectures, shows, workshops, and the obligatory catching up over a drink.

During one of those latter sessions we found ourselves chatting with Mandy Davis. It turned out that she was the booker for the weekly Magic Circle meetings – the night when all the magicians gather at the organisation’s headquarters in London. The outcome of that conversation was that she invited us to perform our brand-new Smith & Burns show, Unbelievable, for the members during December. 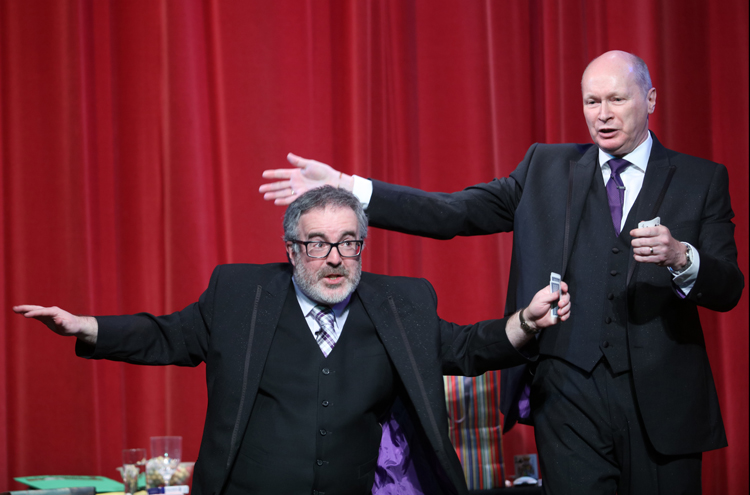 The Magic Circle is regarded as the world’s premier magical society. All the big names have been members since it was formed in 1905. Its state-of-the-art headquarters near Euston Station boasts a stunning theatre, multiple museum displays, a world class library and a host of other rooms.

Most times we perform, Ivor and I are both nervous to some degree. You never know what any particular event will be like, how the audience will react… and sometimes even if the magic will work as planned! Our nerves before this performance, though, reached new levels.

We were given the whole evening to do our show before our peers in the beautiful theatre. And our night at the Magic Circle couldn’t have gone better. It was another incredible experience for us. The nerves turned to adrenaline and we both thoroughly enjoyed the show. Afterwards we received some very nice feedback, which delighted us.

It is easy, as we go through life, to always be rushing onto the next thing. Yet we would do well to sit back and reflect on our journey to date and celebrate the achievements that we have made along the way. Who would have thought that the 7-year-old boy that received a Paul Daniels magic set for Christmas would eventually be invited to share his magic to audiences all over the world, including many of his peers? Maybe that is the real magic!

We can also bring our magic to your event – whether that’s in person or online. Contact us to find out more.